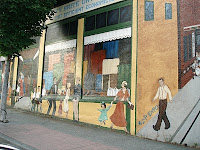 This post details some of the signs that we, as a society, have become accustomed to and soon disregard, especially if we see them often enough. Perhaps they provide snapshots of our times, or at least of this decade. That evaluation is usually best determined in retrospect. The following observations are those which have caught my attention. Some of the signs may be unique to one area only, but others are ingrained enough to cross boundaries.

***
Roadside memorials, a 21st century phenomenon, show how many of our youth are sacrificed on our highways, some by themselves and some with the help of other drivers. The memorial sites may contain white crosses, flowers, candles, mementos, photos and letters covered in clear plastic. Each spot identifies a family’s remorse and loss. The greater number of these memorials recognize young people, either older teens or young adults who have inadvertently shortened their lives by believing in the myth - ‘it can’t happen to me’. The sheer outpouring of love that is shown after the person is gone, comes too late. Most of the memorials are to young men, a few are dedicated to young women. The fact that someone cared enough to mark that person’s passing means at least one person observed the loss. We all deserve some measure of dignity.

***
Murals of city life, of neighbourhood unique offerings, and perspectives which seem to invite us to walk right in seem to abound in our city. These are usually commissioned by the local government, or local businesses but they employ different perspectives, use large themes, and are either technically well-done, or employ stylistic methods. I’ve photographed some of them, and will continue to do so, as their lifespan is often determined by those who own the building. What’s there right now may be covered up or demolished in the construction of something new tomorrow. This vibrant expression of mural art makes me glad to live in a city which prefers to enhance the sides of their buildings to promote community pride. I’ve also noticed that generally, graffiti artists respect this form of art and leave their marks elsewhere. Reams have been written about graffiti art on trains, or wherever there is a blank slate. Art and how we interpret it is a subjective experience. It doesn’t always have to be in galleries to be appreciated.

***
Rural/Urban art has been undergoing a change -- just recently I’ve seen two unique solutions for using antique truck parts, in this case a grill and the complete cab of a 40’s truck used as part of the pasture fencing. The grill was holding the two parts of the gate shut (which didn’t appear to be used often) and the formidable truck cab would surely discourage any horse contemplating escape by jumping over it. There’s an urban version of reuse of automotive parts as well, at one of the community intersections in our city of 2.3 million people. In a previously unused corner of the property sits a community garden, a skater bowl, and the shell of a gutted late seventies model Chevy Malibu station wagon, planted with many types of flowers and decorated by local artists, of all ages. This is recycling, although in certain situations or strictly controlled neighbourhoods, it might offend certain ‘city’ sensibilities. A few decades down the road, and we may look back and call it Folk Art. What’s trash today (rusted vehicles) can be the art of tomorrow.

***
Everything is up for sale! Well, nearly everything it seems. Who wants to buy (fill in the blank)? Just check out ebay, craigslist, and kijiji for starters. Money is the hot commodity, and if you’re good at bartering you will survive well combing these sites. There are some very good deals to be had with perseverance, but does this mean we might eventually lose our penchant for keeping antiques and other treasures in the family? It’s every generation for itself, if that’s the case. Between antique evaluation shows, and junk revival pawn shops, we all want to know what our old things are worth. Then, we feel obligated to either sell the item or buy lots of insurance in case someone else decides to lighten our burden.

***
Ignoring Nature -- one practice that is becoming prevalent in growing cities is the covering up of the open ditches and wetlands where ducks, geese, and herons look for food and nesting sites. Confused critters following their inborn instincts wonder where these former wildfowl sites have gone. They come back each year to previous wildfowl reserves, lakes, ditches, and marshy fields. We’ve confused the natural flow of migration, when we conform to the planning guidelines of cities and real estate development and destroy these habitats. Development is needed if cities are to grow, but ignoring natural watersheds and drainage can backfire. The recent practice of covering up residential green areas with swathes of asphalt or concrete can also damage groundwater. Nature has a way of reminding us when we overstep our bounds as caretakers of this planet.
Posted by D.G. Hudson at 1:12 PM