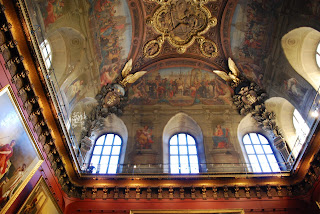 Traveling in the City of Light, you can’t help but notice the wide variation in the guilded sculptures adorning the Seine River bridges, light stanchions, and 16th and 17th century buildings.  On a sunny day, you might need sunglasses.  After visiting Paris, I can fully appreciate the effect of gilding.  The French take special care of their monuments and their past.  Following below is my evidence supporting that statement. 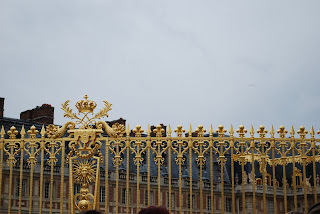 Versailles
This palace seems to be dipped in gold decoration, which enhances the front entrance street appeal. It’s the approach that humbles you. The cobblestones were set in place in such a way as to slow down the horse-drawn carriages and those walking so that they could properly approach the palace of the king. At least, that’s what I heard. . .

Built to house 3000+ nobles, their families and caretakers, including the king and his retinue, Versailles was like a small village for Louis’ court. Statuary, fountains and gardens in the back were part of the entertainment for the court and allowed the king to keep watch on them all.  The Hall of Mirrors, where you can see forever, might have served the same purpose.

Down side: When we were at Versailles, there was a jarring juxtaposition of modern art being integrated into the French interiors. It didn’t work. Even some of the tour guides admitted that the effect was garish.  Exhibitions of this type are allowed to provide additional funds for expert restoration and repair, and general trust expenses. 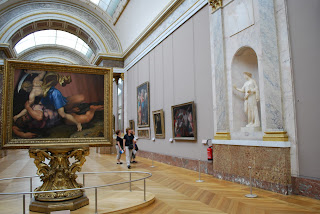 
This beautiful museum was a palace first, before it became an art museum and it shows in the details. It’s also shown in the basement where the foundations of the original Louvre palace can be seen, with a model of the medieval palace.


Paintings of all sizes, sculpture, historical artifacts, and a trove of antiquity collections surround you.  Various coloured marbles, painting and gilt cover the walls and ceilings. What a feast for the eyes and a photographer's dream - you can take photos in this museum.  We saw Winged Victory, Venus de Milo, and Mona Lisa before we started sinking into Antiquity.


Although we spent nearly five hours meandering through the exhibitions, we didn’t see all that we wanted to see. We did our own walking tour after buying their floor map of the exhibits. It's difficult to get a close look at the art in a tour group. This is important if you want photos like we did. I recommend plotting your own path through this art heaven. 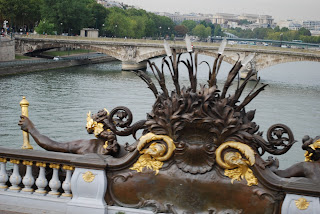 Perhaps the gilding lends a romantic aura on these places, favourites of lovers sharing a kiss. Certain bridges, like the Pont D’Iena by the Eiffel Tower, have more complex architectural designs which offer gilding opportunities.  History can be preserved, and these places prove it. 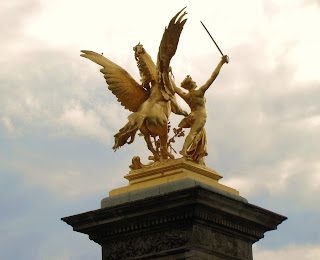 
The name of this opera house refers to the architect who designed the building. It was the setting for the Phantom of the Opera and still survives in grand style. Gilded sculpture tops the roof and highlights the busts of musicians on the front of the building.


We found out - too late - that there are tours of this building when the opera isn’t performing.  Photo detail in upper right on this post.  There are images available on the Paris tour sites if you're interested. 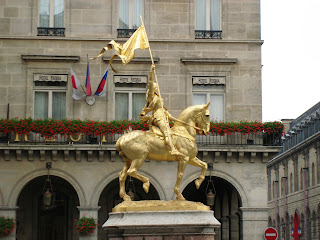 This statue of Joan stands in front of the Hotel Regina, just down from the Louvre Museum on the Rue de Rivoli. She has a majestic presence over the traffic which faces her on the opposite side of the street. Gilded from head to toe, she and the horse remind us of another era in the French past.  I like this commanding sculpture of the French heroine. 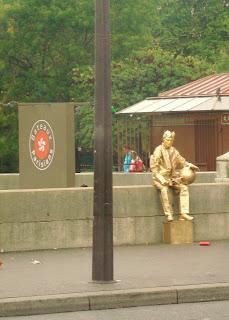 A Gold Mime, on the Pont D’Iena (near the Eiffel Tower)

Sitting on the Pont D’Iena, we saw the golden mime, waiting for someone or something. He wouldn’t say. 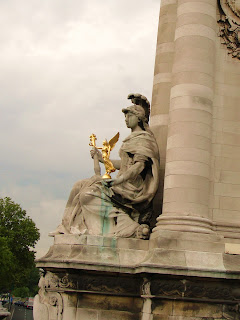 To ‘gild the lily’ is to try and improve on what is already beautiful. Paris seems to have it right.

All the photos taken Autumn 2010 in Paris by DG Hudson.

Do you notice architecture? Any favourite buildings?
Posted by D.G. Hudson at 11:35 PM

Duty vs. the Self - Finding Time


My favourite time to write is in the morning, when it’s quiet and the birds are just starting to chirp.  I don’t always get to do my writing then, as there are other duties that are demanding my attention. We all have those obligations. Many of the decisions we make about our use of time are based on our sense of duty or necessity.


Every day, we decide when and which Duty things will be done: going to work, household tasks, visiting elderly relatives, driving the kids, volunteering, etc. Some we do as part of our routine, but because we fixate on getting the duties done, we forget that we need ‘time out’ for the Self. Our sense of cognitive dissonance (discord) becomes agitated when we push our own needs aside. There’s no need to abandon your duties, just make ‘time for yourself’ one of those duties.

Self-time is whatever restores your sense of equilibrium. Writing does it for me, and I find that I get annoyed when my time is hijacked by those ever present duties. When I take the time for an activity I enjoy, it benefits me in several ways. I distance myself from the problems, the worries, and the annoying things; I lose myself in the act of creating something for the pure challenge of it. The problems don’t go away, but I forget about them for a while.


We each have to find that balance in our life, even though the variables are ever-changing. Make the effort to spare a little time for yourself, you’ll be glad you did.


In Hope Clark’s post, My Fiction Day (Oct 5, 2011) . . . she talks about when she writes best, and why. Her words started me thinking about my own time to write, and how difficult it was initially to carve out that time.

Her post is an interesting look at one busy writer’s schedule. Check it out at her blog: http://hopeclark.blogspot.com/2011/10/my-fiction-day-when-it-flows-and-when-i.html


A YouTube video of a song by James Brown, with his advice: ‘. . .you got to live for yourself, yourself and nobody else’. . .)  It may sound a little narcissistic, but the point is, don’t neglect yourself.

Do you make time for yourself? How do you manage it?
Posted by D.G. Hudson at 9:30 AM