In the Great Bear Rainforest, a vast area has been purchased to protect grizzly and black bears from trophy hunting enthusiasts. This purchase also protects the Kermode or spirit bears (black bears with white coats). A bear hunt has been banned this year by coastal First Nations from Haida Gwaii down the central coast of British Columbia. Other parts of the Great Bear Rainforest may not have these restrictions, check online for hiking and guide information.


The Kermode bear (kerr-MO-dee), or spirit bear is a subspecies of the American Black Bear. It's noted for one-tenth of their population having white or cream coats. The Kermode bear's range includes the north and central coast of British Columbia and inland toward Hazelton, BC.


A male Kermode bear can weigh 500 lb (225 kg) or more and stands 6 feet tall. Females are slightly smaller, weighing in at about 300 lb (135 kg). Spirit bears, because of their ghost-like appearance, hold a prominent place in the oral stories of the Canadian First Nations and Native American lore.


National Geographic estimates the spirit bear population to be between 400-1000 individual bears. In their information, they suggest "the spirit bear may owe its survival to the protective traditions of the First Nations, who never hunted the animals or spoke of them to fur trappers".


*This photo shown previously in the post The Right Place - Must have been the Write Time on my Rainforest Writing blog.


Mammuthus primigenius: The woolly mammoth, or tundra mammoth is the last species of mammoth.

Woolly mammoth remains, which may contain living cells, have been discovered by an international science team in Siberia. Months of research will be needed before findings are conclusive, but what IF soft tissue DNA is found? Will cloning be far behind? These creatures are believed to have died out around 10,000 years ago, although small groups may have survived longer in Alaska and in Siberia.


Whether climatic change or overhunting by humans caused the mammoth's final demise in Earth's past, it's an amazing find for scientists today. I'll be watching for any news about the cloning part. Woolly mammoths were described in Jean Auel's Clan of the Cave Bear series.

Have you heard of spirit bears? What about cloning of the DNA of long-dead woolly mammoths? Do you remember Jurassic Park? Please share in the comments.

To get in the flavor of this blogfest on September 10th, think Chocolate.  What image does that conjure in your mind? 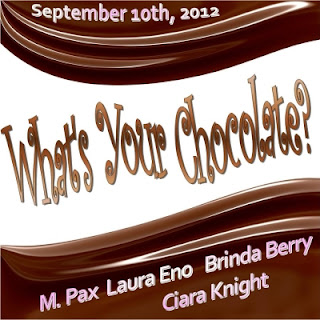 M.Pax, Laura Eno, Brinda Berry and Ciara Knight are hosting the What's Your Chocolate Blogfest.  You just have to talk chocolate, relate chocolate memories, and tell us about chocolate loves from your past:   chocolate fudge, chocolate dipped berries, chocolate liqueur, chocolate cheescake, handmade chocolates, and so on.


What's my chocolate?  Dark Chocolate
and then, there's. . .

One chocolate dark night in early December years ago, we decided to make 150 truffle sized chocolates for Christmas gifts.  As novice chocolate makers, it took hours to shape that many fondants and dip each one into chocolate. We never made chocolates from scratch again.  At least two people are needed to make enough for several gifts, one person to dip the pre-made fondant shapes and one to grate the chocolate and keep it liquid for dipping. Although our place smelled sweet and chocolate-covered candies covered every surface, once was enough.  A true story.

Don't forget to answer the question. . . What's your Chocolate of choice?  Please share in the comments and thanks for stopping by.


Near the Moulin Rouge, Starbucks in Montmartre, Paris.  A welcome break halfway to our destination. . .

The square cut cobbled stone of Pere Lachaise's streets in the autumn.  Step carefully, as this isn't a completely flat surface.   It forces a respectful pace.

The Eiffel Tower seen from ground level, the Trocadero in the lower centre of the photo. The blue building on the left is the entrance to the tower elevator. 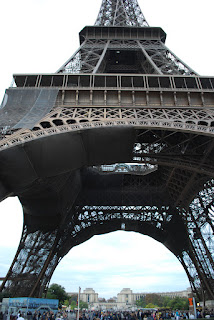 
Forever bronzed in his headlong stride, Winston Churchill walks to meet whatever challenge stands in his way.

Sometimes, it's the little things that stand out in our memory.  For that, you need to be on the sidewalk, at street level.

How do you remember your travels?  Do you keep notes, use a journal, record videos or photograph everything?  Please share in the comments.

Two upcoming blogfests you should check out: