Look North in Vancouver to see the nearby mountain lights hanging in the evening sky. Grouse Mountain is one set of lights in North Vancouver, located on the other side of the inlet.

Exceeding 4000 ft. (1200 meters) in altitude at its peak, Grouse Mountain offers alpine skiing in the winter and hiking trails and other activities in summer and autumn. A breathtaking view awaits you. An occasional high-flyer is deposited via helicopter on the top of Grouse. Four chairlifts and 26 runs are approximately half an hour away from the city of Vancouver. The Grouse Grind is a popular trail for fitness enthusiasts, which runs directly up the fall line paralleling the gondola towers. Be sure to come prepared.

Grouse Mountain had its first lodge built by hand by Scandinavians in the 1920s with wood they carted up themselves. In 1976, a second aerial tramway was built by 'Garaventa', which became known as the Super Skyride. This is now the main tramway, using much larger gondola cars and depositing passengers at a separate terminal. The main lodge is only accessible by tram, hiking trail or helicopter from the parking lot midway up the mountain.

A picturesque location, Grouse Mountain has been used in several productions:

- 1994 The X-Files episode of 'Ascension'.  Actor Duchovny dangled from a gondola in one scene.
- The ski lodge and facilities were used in filming the cartoon, Mr. Magoo.
- Nelly Furtado, singer-songwriter, filmed the video for Spirit Indestructible at Grouse Mountain.

Always check the website to plan your visit to Grouse Mountain.

Have you seen or visited Grouse Mountain? Do you like aerial views or are they vertigo-inducing?
Do you remember the story of Paul Bunyan, a giant lumberjack in American folk tales? (Before chainsaws) OR Have you heard of 'Monty Python' lumberjacks?

Please leave a comment to let me know you were here, and thanks for stopping by. I'll respond!

Wiki of the song
http://en.wikipedia.org/wiki/The_Lumberjack_Song

PARIS - The Man Who Walked through Walls

Caught in an element he heretofore could pass through, Dutilleul, is forever left to ponder his mistake. It all started when. . .


The Man Who Walked through Walls or The Walker-through-Walls, (various translations) is a short story published by Marcel Aymé in 1943. It inspired a few film adaptations as well.

The character, Dutilleul lived in Montmartre and had just turned 43, when he discovered a strange talent - the ability to pass effortlessly through walls. He asks a doctor about it, and receives pills guaranteed to fix the problem. They are never taken and are soon forgotten, as Dutilleul instead goes to Egypt where he meets and falls in love with a married woman. Cherchez la femme**? He comes and goes as he pleases when the woman's husband is away. He becomes complacent in his ability.

On the fateful occasion, he took a pill for his headache, the wrong pill. The medicine the doctor had given him suddenly took effect as he was passing through the outer wall. Dutilleul was trapped in the wall, where he remains to this day.

Text is available under the Creative Commons Attribution-ShareAlike License
This is a summarized version. check wiki link under references for the complete story.


The location of The Wall-Passer or Le Passe-muraille is at Rue Norvins/Place Marcel Aymé. We heard the story from our tour guide, an young American (ex-pat?) from St. Louis who now lived in Paris, because guess what - 'Cherchez la femme'. He had met a  French girl and decided to stay.

Have you heard the story of the Wall-Passer? Would you like this ability? Wouldn't it be great to have one of your characters made into a public commemorative statue? AND, What do you think of the use of the phrase, 'cherchez la femme' ?

'Cherchez la femme' is a French phrase which literally means 'look for the woman'. This is used as an excuse for why a man acts out of character or in an otherwise strange manner. He is usually trying to hide an affair, trying to impress or gain favor with a woman. This expression comes from the 1854 novel and was used in the 1864 theatrical adaptation of The Mohicans of Paris, by Alexander Dumas. The phrase is repeated several times to emphasize the point.

'Cherchez la femme' has become a cliché of detective pulp fiction. It becomes easy to name this as the root cause of whatever problem or situation the male protagonist has at any given moment.
Note: This cliché appears a lot in literature and in real life.
***
References:

http://en.wikipedia.org/wiki/Cherchez_la_femme Definition of this phrase

To have beauty in art and design where one cannot fully see it is a pity. The purpose was to impress in a setting of luxury. The following images are all from Versailles.


Plaster used for moldings is formed by mixing dry powder with water to form a paste. It can then be worked and shaped with metal tools and sandpaper to a specific shape. Plaster can refer to gypsum plaster (plaster of Paris), lime plaster, or cement plaster.


A large gypsum deposit in Montmartre in Paris led gypsum plaster to be commonly known as 'plaster of Paris'. Many great murals in Europe, such as the Sistine Chapel ceiling are painted in fresco, or the paint is applied to a thin layer of wet plaster. The pigments then merge with the plaster layer to form a very durable surface.

The Louvre Museum also has extensive mouldings since it too was a palace. 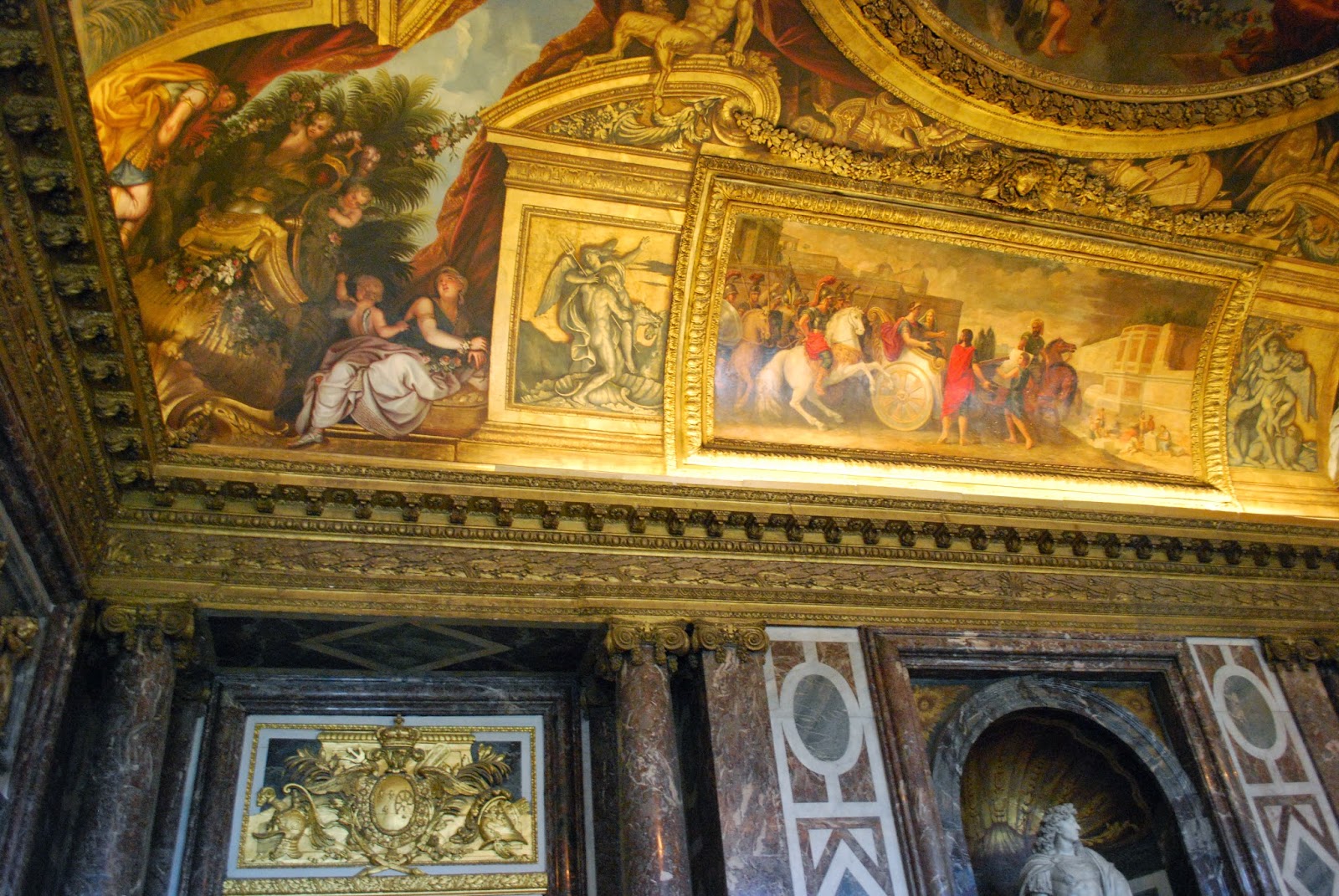 These two images above and below show the intricate detail that can be carved or molded to fit the shape or size required. Plaster can be worked easier than stone or wood, and is lighter. Seeing the detail in the construction of such a grand palace helps us understand why the French treasury was drained in part by this project.

Are you interested in information about historical places? Do you get curious about how things are done? Have you visited Versailles? Any other castles or churches you have visited with interesting architecture and ceilings?

Please leave a comment to let me know you were here, and thanks for dropping by! I'll respond.

A post on Ceiling art at Versailles and the Louvre Museum
http://dghudson-rainwriting.blogspot.ca/2012/04/v-versailles-palace-to-z-challenge.html