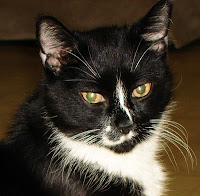 Name’s Slick, that's me on your left. My pack chose me for my shiny black and white fur coat and the dashing white lightning streak across my nose. As I look back after fifteen years, I realize I've been one lucky cat.


Life for me started on the street as a homeless stray that no one cared about, orphaned by a speeding car. They never saw my loving, tender mother slowly making her way across the street. Mom, wake up, Mom, I called. I meowed and meowed, but she didn’t move. I was frightened. I was the last of the litter to leave, having been the last born. What was I going to do? Mom hadn’t shown me how to hunt yet, I was only ten weeks old. I knew nothing about surviving.

Feeling alone and cold, I crawled into the plastic bags that blew about the market area. They kept me warm and hid me from those who frightened me. Humans who lived in the area felt sorry for me and gave me handouts, but I soon learned to hunt small things that weren’t as fast as me. Amazing what instincts come out when you’re hungry.

I could smell the aroma of fish in the boats that docked nearby. It made my stomach growl. Some of the fishermen would give me leftover bits of their haul.  The tough cats and dogs, who scrambled for their bit of food, terrified me. When the big metal cars that humans called trains rattled by, I made sure I was far away. They were noisy, heavy-sounding and the shrieking of the wheels made my ears hurt.

Humans don’t like stray animals hanging around. I found that out when a hunter in a big truck caught me with one of his nets. I had done nothing but try to live on the street. I didn’t understand what was happening. Was this the end? I was taken to a place with many cages inside, and other animals like me, all squalling and making noises. Some of the very tiny ones were very quiet. I was frightened. Maybe being lonely hadn’t been so bad.

After they settled me in one of the cages, I was fed and given water. For the time being it appeared I had only lost my freedom, but was worse to come? Humans came in at different times and looked us over. Some animals were taken away, never to be seen again.

For a few days I lived in that cage, before a human pack of four came to look at all the cats. They were looking at the cage beside me, when I took a chance. I reached out with my paw as far as I could to get their attention. They saw me. The shelter humans asked if they wanted to hold me. Yes! Yes! As they rubbed my fur, I rubbed my nose on each of them so everyone knew they were marked as MINE. That was the turning point in my life. Those humans adopted me into their pack and took me home. My first and only home, it was a marvel for a street-born cat. I had a room to myself, the place where I was put at night. It was warm, with many soft places for a cat to sleep. It took me some time to figure out what a ‘catbox’ was - how’s a street cat to know? Oh, I’m supposed to use that, not just any corner. Soon afterwards, I became an ‘indoor’ cat after a certain (ahem...cough,cough...ack, a hairball) operation.

I became best buddies with the alpha male in my new pack, since he let me do the things a normal outdoor cat gets to do. Like climb trees, chase squirrels and pretend I was lord of my backyard domain, but only when he was outside. The softer feeling females cuddled and petted me. I thought of them as my sisters, so we played and had mock fights. Sometimes I slipped up and scratched one of my pack sisters. Thank goodness they didn’t declaw me – what’s a cat to do without claws, I ask you? There was one female human who seemed to be the mother for all the pack. That was feeding lady, the alpha female. She let me know when I was in trouble, just because her voice became very hard and loud. When that happened, I would lie quietly and try to win her favour back. I used the old passive cat routine. That ruse worked most of the time.

Later in my life, I put on a few pounds from all the good food. My favourite was salmon. I could smell it cooking from anywhere in the house. About that time, I started to feel like an old cat, achy and always hungry. After several visits to the doctor where I got stuck with those sharp things called needles, I learned I had diabetes, whatever that is. I had to be stuck once or twice a day. The alpha male had to give me that sticking, feeding lady just couldn’t. It didn’t hurt, as the needle was very small. I lost all my fat, and my appetite became more normal.

I didn't like going to that place called the vet’s. It was never fun. Howling and noises like you can't imagine came out of the back. The human who checked me out was kind and gentle. If feeding lady held me, I stayed calm, but I sure yowled while we waited, to let them know I didn’t like the place.

Now, I'm back to my usual routine.  I eat, I relax, I go on the deck, I relax, I come back in to see what's new, I curl up in my favorite chair, I nap, I eat, and relax a bit more until it's bedtime.

A cat couldn’t ask for a better life. 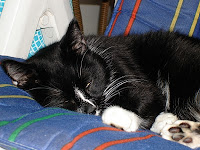 A safe place to live, good food and many happy years as part of a loving pack. Cat heaven can’t be much better than this. Slick signing off.