The Eiffel Tower charmed me more than I expected, with its delicate scalloped ironwork designs on the lower edges. Paris is a city known for its artistic elegance in wrought iron, and this tower is no exception.  How much more fantastic the Eiffel Tower must have seemed in 1889, after its completion for the Paris Exhibition.

The Eiffel at a Different Angle 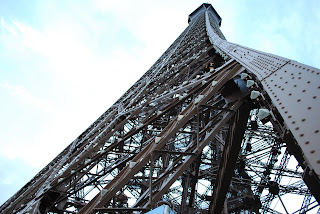 Alexandre-Gustave Eiffel, born December 15, 1832, in Dijon, France, is the man who designed the world famous Eiffel Tower (Tour Eiffel) for the 1889 Exposition in Paris. He was also a writer, publishing 31 books and treatises about his numerous projects and experiments. More information about Gustave Eiffel can be found at the links below this post.


***
72 Names of Men
(scientists, engineers, and associated professionals) who contributed to the Eiffel Tower's construction, line the bottom edge on all four sides.  I was impressed until I discovered the women who contributed were omitted from being so exalted.  It was the Age of Men, then, wasn't it?  Women didn't have the vote.


﻿﻿﻿
﻿﻿﻿ On the lower edge under the first overhang are the names, half obscured by the protective netting.  Since 2010/2011, these names have been restored to their golden lustre, making them a little easier to read from ground level. 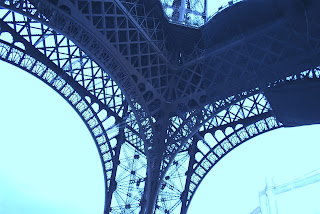 An elevator at the entrance takes visitors to the different levels and offers an interior view of the supporting structure on the way up. A private elevator takes visitors to the second level if they have reservations at the Michelin-starred Restaurant there.  Check the website for information on the third level.

On the first level is the main restaurant, Le 58 Tour Eiffel, on the second level is the Jules Verne Restaurant, both with above average prices.  There are many reviews to be found online for both restaurants. See link below.
***

Blue Paris, at dusk from the Eiffel Tower, Sacre Coeur upper left on horizon.  The Seine River cuts through diagonally. 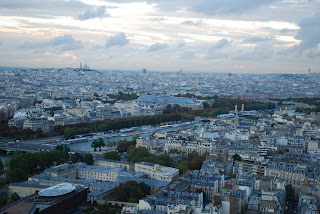 Most of our time on the Eiffel Tower was spent photographing the four sides of Paris visible from the first level.  The photos before and after are a sampling.

The Trocadero View from the Eiffel Tower

Hope you enjoyed the photo tour, and if you'd like more of my Paris Posts, see under the tab at the top.

72 Names on the Eiffel Tower


****
Paris Exhibition of 1889
The tower formed the main symbol and the entrance arch to the fair.